Today I bring you the Thanksgiving version of Palomar in Science Fiction. Well, sort of. Have a look at this.

Yes, it is a Bugs Bunny and Marvin the Martian in the cartoon known as Hasty Hare. Just watch it before you read any more. OK?

About 5:40 the cartoon really takes off as far as I am concerned. Bugs drops anchor from the spaceship and all sorts of mayhem ensues.

You wont see the "Palomar" reference until a little later (6:19) as an observatory comes into view. The observatory looks a lot like Mt. Wilson. Wouldn't you agree? 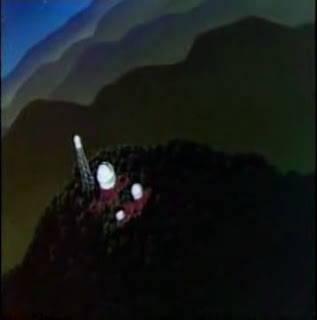 And the real thing: 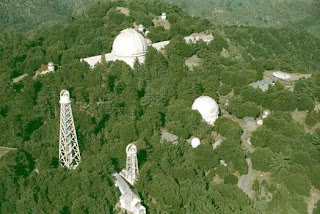 That's much more than a passing resemblance. It looks to me like the artist used Mt. Wilson as the subject for the cartoon.

Finally, here's the observatory with the various astronomical objects that Bugs has managed to drag along. 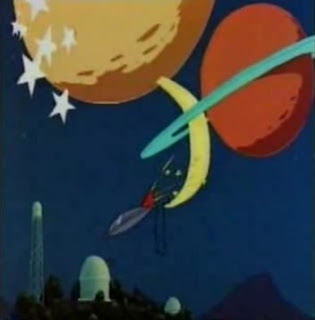 The Palomar reference (and the admittedly weak Thanksgiving reference, well it is more to do with turkeys) comes at the end when the observatory's director, I. Frisby, resigns. Notice the stationary: 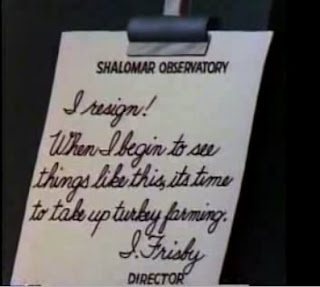 Yes, it is the Shalomar Observatory. The cartoon was released in 1951 just a few years after the Hale Telescope at Palomar became the world's largest telescope.

As far as I know no employee of the Palomar Observatory has ever resigned to take up turkey farming - yet.

UPDATE: Commenter Anonymous points out that it was actually I. Frisby who signed the letter (I must need to get my glasses checked) and that the astronomer is a caricature of Warner Brothers animator Fritz Freleng.

Judging by the number of comments & emails I have received on this post I would say that I need to have more cartoon astronomy posts in the future.
Posted by Palomar Observatory at 1:56 PM 7 comments:

Here is a batch of photos from last week's aluminizing of the 200-inch mirror. BIG THANKS to Susan V for capturing these shots while I was away at Corning. She did a super job!

Remember to click on the images for more aluminizing goodness. The Palomar day crew working under and inside the 200-inch mirror cell prior to the mirror's removal from the telescope. The 200-inch mirror removed from the telescope, sitting on the aluminizing cart. Tools of the trade for washing telescope mirrors. "You missed a spot." "Green River" is applied to the surface of the mirror to strip away the thin coating of aluminum. This reveals the mirror's honeycombed backside. Notice that some aluminum still remained on the right side of the disc when this was taken. The final aluminum is stripped from the mirror.

The mirror is covered overnight to protect the clean surface. The 17.5-ton bell jar is lifted as the mirror gets a final air cleaning to remove any dust from the surface of the glass. One of the three glow discharge events prior to aluminizing the mirror. Two of the 220 coils fire to deposit the thin layer of aluminum to the surface of the mirror.


If you haven't yet, be sure to check the post below for the "official" before and after shots of the mirror.
Posted by Palomar Observatory at 12:13 PM 3 comments:

I have so many photos of the aluminizing I don't know where to start. Here are the dramatic before and after shots of the mirror. As you can see the crew here has done a fantastic job. I haven't had time for updates lately, but this will catch everyone up.

Late Sunday afternoon the new layer of aluminum was deposited on the mirror. Monday morning atmosphere was slowly re-admitted to the tank and the mirror was examined late Monday morning. All looks very good. The mirror is being returned to the telescope as I type this. 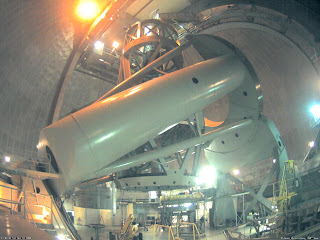 The crew has finished cleaning the mirror. Just a short while ago they picked up the 17.5-ton top to the bell jar (above) and carefully lowered it around the 200-inch mirror. The mirror is safely inside and the rough pumping has begun.

All of the air must be drawn out in order to put down the new layer of aluminium on the mirror's surface. It typically takes a day or so to achieve the proper vacuum. 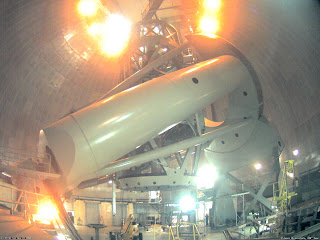 Posted by Palomar Observatory at 12:39 PM No comments:

Today the mirror was washed and stripped of aluminum. Starting at 7 am PST on Saturday the crew will give the mirror a final alcohol wash and when they are ready they will lift the top to the vacuum chamber over the mirror tomorrow morning and start pumping down to vacuum.

There will be lots of photos to share here on the blog next week of both the aluminizing and of the amazing trip that I have had to the birthplace of the mirror - Corning, NY. Stay tuned.
Posted by Palomar Observatory at 8:39 PM 1 comment:

I am still away and haven 't had any reports come my way, but in the picture below (click to enlarge) you can see the crew giving a final push to put the mirror cart intoplace for washing and stripping the mirror. 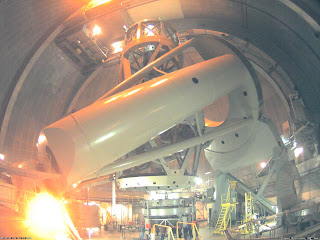 Day 1 finished with the mirror cart being pushed under the telescope. The "knees" were removed and the cart raised to catch the mirror. You can see a really quick movie here. Don't worry, I'll have a much better movie of the activities sometime next week. 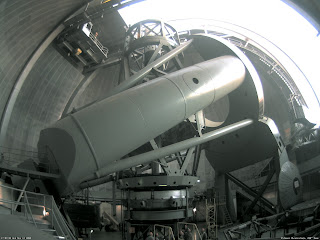 The photo shows the mirror as it is now - just lowered from the telescope. That's how it is spending the night. Expect the Palomar Day Crew to push the mirror cart and its precious cargo back to the aluminizing station sometime after 7 am PST on Thursday.

After than the washing and stripping of the old coating will begin.
Posted by Palomar Observatory at 8:47 PM No comments: 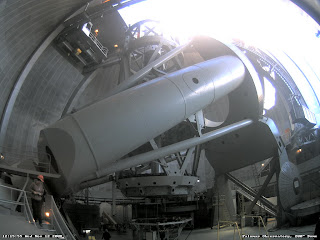 The Cassegrain cage has been removed.
Posted by Palomar Observatory at 11:17 AM No comments:

I am unfortunately travelling today and will have to update the blog from afar. Work on removing the 200-inch mirror is underway. It is a very involved process. First the science instrument is removed from the Cassegrain cage. Then (seemingly) miles of wire and fiber optics must be carefully removed as well. The telescope is fitted with earthquake tie downs, computer racks are removed and then, eventually, the cage is lowered.

At last check of the webcam, the cage is still attached. There is still work to go before they are ready to lower it.

Here's an interesting shot from today's activities. I explained how such images are produced in an earlier post. Two short webcam movies, hosted at HPWREN, of some of this morning's activities are available here and here. 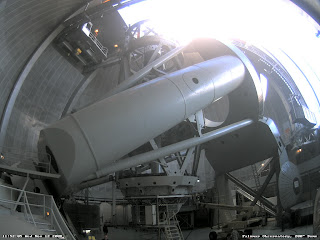 That's something you don't often see in the daytime, but it provides plenty of light & and some much needed warmth for the crew. Don't worry - I expect they will close the dome before the mirror comes out.
Posted by Palomar Observatory at 10:40 AM No comments:

Here's another YouTube preview of aluminizing the 200-inch mirror.

Remember the action begins on Wednesday which may be the best day to watch via the webcam.
Posted by Palomar Observatory at 10:40 AM No comments:

This Week: Journey to Palomar Finally on TV & 200-inch Aluminizing

The Journey to Palomar will finally be showing on PBS stations starting tonight. Sorry, if I have been promoting it too much in the blog.

On Wednesday of this week we will begin re-aluminizing the Hale Telescope's 200-inch mirror. Here's a time-lapse video preview from June 2005.

The Great Galaxy in Andromeda Here's another scan of a vintage PR shot from Palomar. This is of M31, the Andromeda Galaxy. The image was captured by the 48-inch Schmidt telescope at Palomar (now known as the Samuel Oschin Telescope) and was copyrighted by Caltech in 1959. Believe it or not, we still have a limited quantity of this poster for sale in the observatory's gift shop.

M31 has been an important galaxy in the history of astronomy. As the closest spiral galaxy to the Milky Way it has served as an important stepping stone out into the universe. In the 1920s Edwin Hubble used the 100-inch Hooker Telescope on Mt. Wilson to determine that the Andromeda Galaxy is a separate system from the Milky Way. His determination of its distance was off by a factor of two - a measurement that was later corrected by Walter Baade, using the 200-inch on Palomar. Modern estimates place the distance at 2.9 million light years.

M31 was photographed using the Samuel Oschin Telescope as a part of the Second Palomar Sky Survey. The photographic plates from that survey have been digitized and the images are available online. Davide De Martin of SkyFactory.org has used that data to produce a beautiful image of the galaxy.
Posted by Palomar Observatory at 8:21 AM 2 comments:

Journey to Palomar getting some good press

The Journey to Palomar is getting some coverage in advance of its TV premiere next week. The website for Sky & Telescope magazine has an article on the show that includes an audio interview with the filmmakers and an extended preview of the film. Check it out.

There is also an article about the 200-inch mirror in the December issue of Sky & Telescope, but I haven't seen it yet.

Here's a story on the movie from the Chicago Sun-Times.
Posted by Palomar Observatory at 2:05 PM 2 comments:

Every PBS affiliate gets to choose their broadcast date and time for The Journey to Palomar. Because of this, you'll want to check your local listings.

If you happen to be in Ketchum, Idaho this Sunday you can see an advance screening at the Magic Lantern Cinema with George Ellery Hale's grandson. How cool is that?
Posted by Palomar Observatory at 11:52 AM 3 comments:

Here's a movie of a recent instrument change at Prime Focus. A high-resolution version (131 mb) is available here. That's the Hale Telescope's Large Format Camera heading down and the Wide-field Infrared Camera going up. Instrument changes such as this one are pretty common, happening several times each month. What is uncommon is re-aluminizing the 200-inch primary mirror. We only do that every 2 years or so.

On Wednesday, November 12 be sure to tune in to the Hale Telescope's web cam to catch all the action. The 14.5-ton mirror will be pulled from the telescope that day.
Posted by Palomar Observatory at 10:26 AM No comments:

I would like to offer a big "thank you" to Celestron for their recent donation to the public outreach programs at Palomar Observatory.

Last Sunday, Celestron's Kevin Kawai attended the Journey to Palomar screening at the observatory and before he and the rest of the Celestron group left the dome they presented this telescope to us. No, not the 200-inch one in the background, but rather the NexStar 130 SLT that's in the box with Kevin (right) and myself. Me, along with Celestron's Men in Black.

The NexStar will be one of the telescopes put into use for new public outreach programs that will soon be taking place at Palomar. More on the new programs will be posted here as they become ready.
Posted by Palomar Observatory at 11:41 AM No comments:

Journey to Palomar on Planetary Radio

This week the Planetary Society's on-line show Planetary Radio profiles The Journey to Palomar and interviews filmmakers Robin and Todd Mason. Check it out here.

Sunday's screening of the new documentary inside the dome of the Hale Telescope was a big hit. Above is a webcam shot from during the screening. That's Ronald Florence, author of The Perfect Machine, on the big screen. After the show, we opened the dome for our guests.

More shots later in the week.

p.s. Don't forget to vote today!
Posted by Palomar Observatory at 8:06 AM 2 comments: